“Secure Communities and getting Assistance” 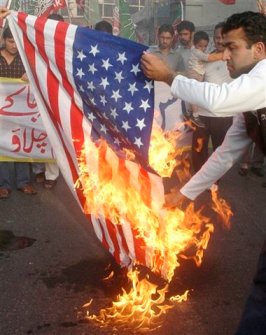 Top Pakistani government officials on Friday said the 33-year prison sentence for the doctor who helped the CIA track down Osama bin Laden is payback for how the U.S. went about getting the Al Qaeda leader, and they shrugged off criticism of the verdict by telling America to stop “over-reacting” and “take a deep breath.”

“You got Osama bin Laden. We’re happy he got killed. But the way it was done we’re not happy with. We didn’t like that,” a Pakistani official told Fox News. The official spoke on condition of anonymity due to what he described as the fragile state of U.S.-Pakistani relations.

We’re wondering how these actions fit with those who are supposed to be living in secure communities with the assistance of local Imam’s, Hispanics and other minorities aiding the Justice Department or at the very least, local law enforcement.

The latest comments did not sit well with lawmakers who have been speaking out for Dr. Shakil Afridi, questioning why the Obama administration did not do more to protect the doctor and his family before he was arrested last year.

It sure seems to us that any country that proclaims happiness over “We’re happy he got killed…” would be as celebratory as the USA was rather than to take out their frustrations out on the one man who really assisted in the identification of bin Laden.

“The reaction indicates how out of touch the leaders of that country are with reality,” California GOP Rep. Dana Rohrabacher, chairman of a House Foreign Affairs

subcommittee, said Friday. “They are so blinded by their radical Islamic ideology that they cannot see our outrage is justified.”

In a strong bipartisan display of congressional anger in response to Afridi’s jail term, senators on Thursday voted 30-0 in committee to cut $33 million in aid to Pakistan – one million for every year of his sentence. That move came a day after a tribal court in Pakistan – where the doctor was not allowed to be represented by a lawyer – passed its sentence. The diplomatic friction has also complicated negotiations between the countries about Pakistan re-opening overland supply routes to Afghanistan.

Afridi ran a vaccination program for the CIA to collect DNA and verify bin Laden’s presence at the compound in the Pakistani town of Abbottabad where U.S. commandos found and killed bin Laden in a stealthy raid in May 2011. Viewed as a hero in the U.S. for helping nab the terrorist mastermind behind 9/11, Afridi was treated like a criminal in Pakistan, a Muslim nation whose alliance with the U.S. has been uneasy.
One of the founders of Pakistan’s constitution and a top Supreme Court lawyer in that country told Fox News that Afridi should not have been tried by a tribal court and would not have been convicted if he had faced a federal court.

Yes that is a good assessment of Pakistani law – but for whom and for what? It is precisely the same in this country in lieu of the Obama Administration having total reckless disregard for America’s Constitution.

Pakistani officials continued to insist the U.S. should not let the case dictate broader policy. Supply lines were closed after a U.S. attack on the Pakistani side of the border killed 24 Pakistani soldiers in November, and reopening them is a key priority for the U.S.

“The U.S. is allowing one issue to become so bloated, at a difficult time,” according to one official. Those concerns don’t seem to be shared by U.S. lawmakers, who continue to call for Afridi’s release.
“All of us are outraged at the imprisonment and sentence of some 33 years, virtually a death sentence to the doctor,” Arizona Sen. John McCain, the ranking Republican on the Senate Armed Services Committee, said Thursday. “It frankly outraged all of us.”

GOP lawmakers also have raised questions about how Pakistan learned of Afridi’s involvement in the operation that led to bin Laden’s death. Officials in the Obama administration insist that it did not reveal it, telling Fox News the Pakistanis found Afridi “on their own.”

But Rep. Peter King, R-N.Y., has charged the administration officials talked about the doctor and his DNA sampling in describing the raid and implied that the loose talk led to Afridi’s capture.

“This has been handled very poorly right from the time of the raid,” said King, chairman of the House Homeland Security Committee. “They put him out there.”

Afridi’s lawyer, Samiullah Afridi, told AFP he plans to appeal the sentence.
“We have requested the Khyber administration to provide us with the documents related to the trial and conviction, and once we get them, we will file an appeal in the office of the commissioner of the Frontier Crimes Regulation,” he said.

The lawyer, general secretary of the Peace Movement, a civil society group against militancy, said the doctor did not commit any crime, but had instead worked “to help eliminate terrorism.”
As for us…$33 million is a drop in the bucket when compared to the billions being sent in relief to Pakistan; however, we are reasonably certain that the Obama administration will not offer anything else.