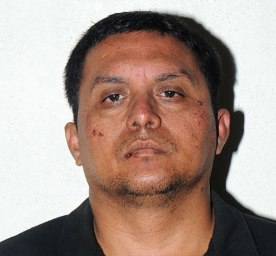 Miguel Angel Treviño Morales, top leader of the vicious Zetas drug-and-extortion cartel, was in a cell in Mexico City on Tuesday, awaiting interrogation and possible extradition to the United States.

Treviño, known as “40,” was transported to the capital late Monday after his capture in the border city of Nuevo Laredo by Mexican Naval special forces following what authorities described as a long pursuit based in part on U.S.-supplied intelligence. Mexican media showed images of him striding in to the federal prosecutor’s organized crime unit, wearing a black polo shirt, escorted by military guards but without handcuffs or other restraints.

Treviño was considered one of the most brutal leaders of a particularly brutal organization, one that branched out from drug trafficking to extortion, kidnapping, and the smuggling of migrants – who Treviño and his men routinely slaughtered when they did not cooperate or pay up, authorities say.

Furthermore, its members were responsible for the 2011 Monterrey casino fire that killed 52, the August 2010 massacre of 72 migrants on a ranch near the U.S. border, and the killing of 27 farm workers in Guatemala in 2011.

seven months ago. His government will certainly attempt to use the arrest to prove its commitment in the drug war — a commitment that has been questioned in many circles, including among U.S. officials who had previously worked extremely closely with their Mexican counterparts but found the rules changing under the new administration.

But the capture will also likely ignite a bloody wave of violence as Treviño’s cohorts fight to succeed him.

It also strengthens the hand of the most powerful drug lord in Mexico, Joaquin “El Chapo” Guzman, whose Sinaloa Cartel competes with the Zetas and may now have its eyes on Nuevo Laredo, Treviño’s hometown and one of the most lucrative crossing points for the shipment of tons of cocaine and marijuana into the U.S.

Under Treviño, the Zetas “controlled hundreds of miles of Mexican territory along the border of Mexico and the United States, which they used to conduct their drug trafficking and money laundering operations” that were valued in millions of dollars, a 2012 indictment in U.S. federal court stated.

The U.S., which had offered a $5-million reward for his arrest, may seek Treviño’s extradition.

The Zetas were formed nearly a decade ago by leaders of the Gulf cartel as their muscle, recruited from a group of deserters from the Mexican army. But the Zetas eventually split from the cartel and surpassed it, spreading its operations through southern Mexico and Central America and exhibiting levels of brutality not previously seen with such regularity. Beheadings, massacres of migrants, torture, and dismembering of live victims all became routine parts of the Zetas repertoire.

Authorities believe the Zetas are responsible for many of the more than 70,000 people killed in the last six years of a military-led offensive against powerful drug cartels and fighting among the traffickers.

And guess what…the United States Senate wants to legalize these types of individuals.