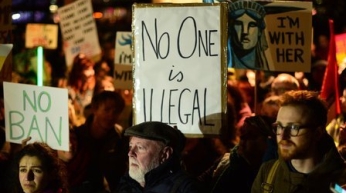 Now as president, he has signed executive orders that restrict entry of immigrants from seven countries into the U.S. and authorize the construction of a wall along the U.S. border with Mexico. He also signed an order to prioritize the removal of “criminal aliens” and withhold federal funding from “sanctuary cities.”

Which in my learned opinion is what he should do! Those seeking to deny the mayhem caused by MS 13 are clearly mistaken. Moreover, a simple read of just about any day’s newspaper would declare this conversation by Scientific American false.

Look at this problem from the traffic angle. There are traffic accidents daily in every

authority of sanctuary cities. Pick up a gun, fire it into a person’s head and kill her, then walk out of court scot-free in San Francisco California only shows me that where and when these researchers are getting their source material is false.

The clear travesty behind this “groundbreaking theory analysis” is it is obvious when doing this type of research, it is imperative that researchers compare apples to apples and oranges to oranges. This was not the criteria of the research or the hypothesis that went into it.

In my opening statement, actually given by President Trump after his victorious and history-making triumph in the election from a quote in Scientific American stated in its entirety,

But as far as reporting goes, that message is good enough for a headline – which the did appear to receive their proportion. But this is not apples to apples. It does not take a rocket scientist to read President Trump’s statement and see that there is a word that makes this research qualify for an immigrant to immigrant only. The problem with Scientific American’s research is again in the hypothesis and what is being compared.

If legal immigrants to legal immigrants are the ones being studied here, then it makes perfectly good sense predicated upon their findings. However, that is not what our president is doing that has had him underscored since the Obama administration with his created loopholes.

In typical Democrat protocol, Scientific American used a scheme for headlines hoping to find a person or people out there that would buy into this oxymoron.  Which is why I’m writing about it. President Trump is talking about the 12 million ILLEGAL ALIENS that have happened upon our nation’s soil. Now, if Scientific American wanted to compare entities they would be comparing illegal immigrants to illegal immigrants they have all broken the law just by being here. Furthermore, they would be examining the impact on public safety and resources, violence, and drugs brought into America by gang members.

So, it would be far more effective for Scientific American to stop their headline debacle and stick to the facts.