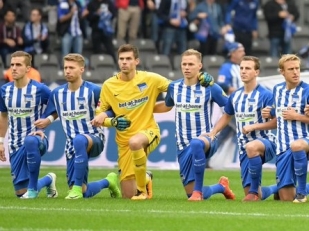 “Hertha Berlin offered the world a vision of solidarity ahead of their Bundesliga game against Schalke by joining the #TakeAKnee movement currently sweeping through the sporting world in the United States.

“Hertha BSC stands for tolerance and responsibility. For a tolerant Berlin and an open-minded world, now and forevermore,” the club tweeted as players from the home side knelt in the centre circle of the Olympiastadion prior to kick-off.”

“Hertha BSC stands for tolerance & responsibility. For a tolerant Berlin & an open-minded world.”

The #TakeAKnee campaign started in the US last year when former San Francisco 49ers quarterback Colin Kaepernick knelt during his country’s national anthem as a way of protesting against racism. With  the movement gaining huge momentum in the United States, Hertha Berlin have taken it to Europe with images of players and coaching staff kneeling and linking arms certain to raise further awareness around the issue of tolerance. 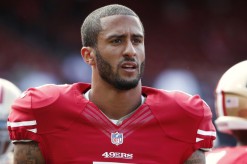 It should be noted and clearly stated that Kaepernick’s stunt has only hurt his further chances of playing in the NFL. One, he did not sign with the 49’ers organization which made him a free agent and the 31 other clubs could not justify paying a sub-par quarterback $14 million per season. Two, the tell-tell sign that the nation of fans is not behind Kaepernick’s stunt is evidenced in the leagues falling ratings.

San Francisco 49ers quarterback Colin Kaepernick is refusing to stand for the national anthem before games because he believes the United States oppresses African Americans and other minorities.

“I am not going to stand up to show pride in a flag for a country that oppresses black people and people of color,” Kaepernick said. “To me, this is bigger than football and it would be selfish on my part to look the other way. There are bodies in the street and people getting paid leave and getting away with murder.”

People do not want to see any man or person protesting in like fashion. Colin Kaepernick doesn’t seem to think it is wrong to protest when he was a college athlete, a Super Bowl starting quarterback, or at any other time in his polished up “privileged” life until he became the lack luster player he actually is.

I believe that Mr. Kaepernick is wrong for this reason. It is stated in the NFL’s Behavior and Standards for the Players that: All players on the field at the time of the playing of the nation’s National Anthem, that said players should stand up, face the flag, (optional) cover their hearts with their right palm of hand until the Anthem is ended.

For starters, Mr. Kaepernick has already broken a rule established by the NFL when their rulebook was

written. It further infuriates me that any person does not have anything to say vis-a-vie showing pride in a nation that allows him to make 14 million dollars per season for what? I think Colin Kaepernick has failed the 49’ers organization with his poor play and therefore sitting the bench. All his accumulated numbers and statistics are down including those compared to his rookie season.

I can clearly see that having come off one of his best season’s ever with the loss to the Baltimore Ravens in the Super Bowl; subsequently, having a bad attitude that caught up to his performance whereby he deserved to be placed on the second team thus allowing his back-up quarterback to move in as the starter. It should be well pointed out that Kaepernick’s behavior and protesting for people of color even came into the picture.

If it turns out to be a consideration then it should be well noted that HERTHA BSC lost the game 0-2.

Academia, Constitution, Musicianship, all around Caucasian male, straight, and professes Jesus Christ as the Lord of my life. Guitars -- Classical, Acoustic, A/E, Strat, a real bassist at heart, Les Paul Standard bass.
View all posts by J.Paul →
This entry was posted in Accountability, Political Correctness and tagged A Platform, Big Mouth, Not well thought out. Bookmark the permalink.
Loading Comments...
%d bloggers like this: