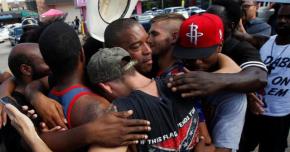 After days of violence and heightened racial tensions in the U.S., the White House responded this week to an online petition asking the federal government to formally label the Black Lives Matter movement as a “terror group.”

“Terrorism is defined as ‘the use of violence and intimidation in pursuit of political aims,'” read the “We The People” petition, created July 6 on the White House website. “This definition is the same definition used to declare ISIS and other groups, as terrorist organizations.”

Black Lives Matter, the petition said, “earned this title due to its actions in Ferguson, Baltimore, and even at a Bernie Sanders rally, as well as all over the United States and Canada.” It asked the Pentagon to recognize the group as such “on the grounds of principle, integrity, morality, and safety.”