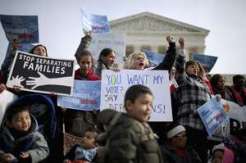 President Barack Obama is set to reveal a sweeping plan to shield up to 5 million immigrants from deportation, revamp the government’s immigration enforcement efforts and overhaul the nation’s visa system, according to senior administration officials.

Interesting so far huh? That original paragraph was actually written in November 2014 and apparently filed by Jeremy Redmon at 6:00 pm for The Atlanta-Journal Constitution. The article is quite good; however, as usual the president still almost two years later has yet to determine some rather significant matters.

I am not going to place all of the blame on President Obama though he does deserve it. Yet it has been the lack of serious reform proposals written by members of Congress, Department of Homeland Security, or anyone within the State department. In fact the only groups of unheralded individuals I know of are those advocacy groups such as NumbersUSA, FAIR, Judicial Watch, and various members of this organization.

This by executive order, DHS, and affiliate agencies is what we do know: That members of the US Citizenship and Immigration Service, US Immigration Customs Enforcement, as well as members of the Border Patrol, ATF&E, and the FBI are NOT to turn back any persons attempting to bypass a border checkpoint or to cross over into the USA unless they have been arrested of a felony.

This much has always received just a dead gargle from me, especially concerning Arizona where how does one in law enforcement find out or allegedly know if some person is here illegally? The law enforcement within the state of Arizona is under US Supreme Court orders not to ask – as is USCIS, USICE, and our Border Patrol agents.

Therefore let’s ask shall we: What precisely has been done to revamp the government’s immigration enforcement efforts, SURVEY says — Nothing! With the exception of changing to an “Open Borders” style nation. What exactly has been done to overhaul the nation’s visa system? SURVEY says — Nothing of course with the exception of increasing the amounts of HB-1 and other worker visas.

A big part of the plan would provide work permits and three-year deportation deferrals for people who don’t have legal status but do have children who were born here or are legal permanent residents. To be eligible, they must have lived in the U.S. for more than five years, submit to background checks and pay taxes.

Obama’s plan would also expand a program granting temporary deportation deferrals and work permits to immigrants who were illegally brought here as children. The move would eliminate the age cap in the program — now at 31 — and require them to have continually resided in the U.S. from January 2010 to the present, a change from June 2007.

Further, the Obama administration will sharpen the focus of its immigration enforcement on people with serious criminal convictions and those who have recently crossed the border illegally. Related to that, Homeland Security Secretary Jeh Johnson has reworked a memo outlining immigration enforcement priorities for federal authorities. He has already released tens of thousands from custody…to roam our streets.

We have been wondering “why” so many felony arrested criminals had been released from jail. One must know it is part of King Obama’s plan.

Most of the above mentioned matters saw the light of day. However in May 2015 an Appeals Court ruled against Obama’s intentions with this plan. Something I have said and again my statement must be stated again for those Supreme Court Justices and all special interest and advocacy groups.

When a person tries to undo everything that has been done for at least a generation and pursuant to the people’s wishes, congress votes against that action is congress NOT working with Obama or are they working for the citizens best interest?