Must be a National security matter

One of the wisest ideas I ever came up from happened for me a an early age. Just about ready to graduate high school with a driver’s license with “things to do, and people to see” I felt as though life, or that version that I was living at the time was a typical for a Southern California boy doing the Eagles version of Life in the Fast Lane “surely makes you lose your mind…” It just seemed appropriate to live, eat, and otherwise as fast as you could.

I can easily remember my father saying, “so what’s your dam hurry, Paul?” Every time I looked at my wrist watch for crying out loud, there was my dad, “are you taking medication? At the rate you’re looking at that watch it looks like you’re preparing something.” My father’s lessons on how to live seemed to me at the time that I was behaving in such a way that I was going to miss something.

It is so easy for me to look back at the people I often times went to visit. It seems that a day doesn’t go bye that any one of those “on again…off again” relationships doesn’t throw me directly over the edge. Yet, there are still those things — that every once and awhile rears its ugly head — you know, those times when were taught, yet still as low profile as possible we continued on our way.

It is very hard for me to pinpoint the precise time but I believe it was around the 1960s through the 1980s when the liberal left started putting some of the “older” ideologies to work along with far too much offending, insulting, and given no reason at all, started in with the demagoguery, or spoken like their ideas were sent directly from God and their rubbish went by the name of political correctness.

What most people seem to have forgotten is that the entire usage of political correctness undermines most of all a language and heretofore other issues concerning manners, relationships, for men it has become, “should I or — shouldn’t I?” Recently because of the situation of government, moreover, the unmitigated fact that no one holds anyone accountable for their actions.

I will say that same-sex marriage, legalization of marijuana, sending national secrets on a non-secure server, making secret agencies to account for the comings and goings of illegal immigrants, not to mention the professionalism of sharing intelligence information, are a direct result of one trying to be politically correct. This entire PC phenomenon that President Obama barks about it should be remembered was created by him. 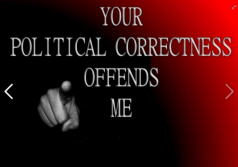 Yet as our language changes so does PC’s phenomenon changes the American cultural context. By the illegal way that your president has decided to shore up the nation’s immigration problem what could be more PC than Nancy Pelosi’s — D CA, “to refer to someone as ‘illegal’ is just un-American.”

It is the truth that the American people want. Not recruiting hundreds of thousands of children from Central and South America under the auspicious of the now Court guarded DACA and DAPA as was used by the current administration. Those acronyms stand for the Deferred Action for Childhood Arrivals and Deferred Action for Parental Accountability.

pronounced the greater evil of an irresponsible government. What I am referring to is this — I invite anyone and everyone to look at the front page of this Contemplative Thinker. I have been trying to show the profound political, cultural, societal, and all of its reaction to a person who golf’s and flies to Hawaii on a whims notice and how Republican candidates will argue over anything that has no basis whatsoever.

Ah yes, as a high school student when one was called to the customer service department — it was ‘ut-oh’ what have I done wrong. Most people had such a reverence for what real customer service used to be — that has dissipated from the American way. As such for me it is a good societal value that has been lost. Can you think of any?