The Obama administration regularly cuts a break for businesses that hire illegal immigrants, reducing their fines by an average of 40 percent from what they should be, according to an audit released Tuesday that suggests 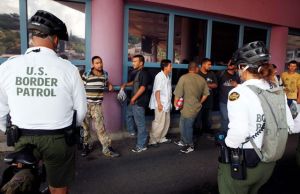 the government could be doing more to go after unscrupulous employers.

According to the audit, conducted by the Homeland Security Department’s inspector general, U.S. Immigration and Customs Enforcement cut one business’s fine from $4.9 million to slightly more than $1 million — a 78 percent drop.

Investigators said the reduction is legal, but it may be undercutting the administration’s goal of getting tough on businesses that hire illegal immigrants.

“The knowledge that fines can be significantly reduced may diminish the effectiveness of fines as a deterrent to hiring unauthorized workers,” the inspector general said.

The report was released the same day that a coalition of business groups wrote a letter to House Speaker John A. Boehner, Ohio Republican, asking him to pass an immigration bill this year. The business groups said they supported Mr. Boehner’s list of immigration principles, which would give businesses a new supply of legal guest workers while granting legal status to most illegal immigrants already in the U.S.

While most of the attention in the immigration debate goes to illegal immigrants themselves, analysts say the problem would be much smaller if businesses would abide by employment laws.

Under President Obama, the federal government was supposed to be putting more of an emphasis on going after employers. ICE specifically announced that it would conduct more audits of the I-9 forms all businesses are required to keep demonstrating that their employees are authorized to work in the U.S.

The goal was to try to ramp up pressure on businesses to hire legal workers.

Jessica Vaughan, director of policy studies at the Center for Immigration Studies, said Mr. Obama has talked a good game but hasn’t followed through.

“This audit confirms what I’ve found in reviewing ICE audit records obtained through FOIA,” Ms. Vaughan said in an email. “Some field offices are conducting worksite enforcement (albeit on a tight leash) as if they actually mean to deter and punish illegal employment. Others do not take it seriously and are just going through the motions. Their goal is to rack up enough audits so that the administration can use the numbers to claim that it is vigorously enforcing the law.”

The inspector general’s report said ICE submitted notices totaling fines of more than $52.7 million from 2009 through 2012, but ended up charging only $31.2 million — for a 40 percent break for businesses.

Investigators said the agency is allowed to reduce fines if it seems the businesses’ finances can’t handle a large penalty.

All businesses are required to store the I-9 forms submitted by employees that show their legal work status.