The Proposed Immigration Bill by the Gang of Eight 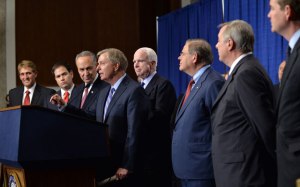 The Proposed Immigration Bill by the Gang of Eight

We are not precisely sure whom it is that these eight U.S. senators are trying to pull this nonsensical piece of legislation on; however, these senators need to understand that there are people who care about the rubbish they are peddling.

We are in the process of reading the proposed legislation (bill) and we encourage our readers, friends, associates, colleagues, and acquaintances to do the same. We only ask that you suggest doing the same with all of those who are around you.

Quite openly it is not a difficult task; however, what has been time consuming is the amount of idiosyncrasies where one needs to stop and admit openly and honestly, “promises, promises…, and we have all heard this before…so what is different now.”

We can assure you that the only differences that exist are those which grant opportunity, amnesty, and/or entitlements to those people who have broken our system of laws and are being rewarded for their deeds.

Since the birth of our nation, the United States has recognized the vital role of lawful immigration, as it brings important economic and cultural benefits. We have always been, and will continue to be, a nation of immigrants.

We are also a nation of laws. The “Gang of Eight” bill introduced in the U.S. Senate violates the very rule of law principle that creates opportunity for immigrants and makes America a beacon of hope for the world.

Giving legal residency to the 11 million people who came here illegally has one definition: amnesty. Amnesty rewards unlawful behavior and diminishes opportunity and prosperity for lawful immigrants and all Americans.

The Senate bill imposes significant costs on taxpayers. At a time of trillion-dollar deficits and $17 trillion in debt, the cost of implementing amnesty and the strain it will add to already fragile entitlement and welfare programs should be of serious concern for everyone.

After decades of empty promises on immigration enforcement, Congress simply lacks credibility to keep its promises. A comprehensive amnesty bill was tried before and it failed. In 1986 we had about 3 million unlawful immigrants. Congress granted them legal status with a promise to control our borders and fix our legal immigration system.

Lawmakers who supported the 1986 bill promised in grand speeches that amnesty would never happen again. Now there are 11 million unlawful immigrants in America because amnesty was immediate but the border wasn’t secured, workplace laws were not enforced, and our legal immigration system was not fixed. The result of amnesty is clear — it encourages more unlawful immigration in hopes of future amnesties.

This new bill is much the same as the last: immediate amnesty in the form of provisional status within months and lofty promises of “strategies” and “plans” for enforcement years later.

Read the bill: Full text of the Senate legislation

Rather than rewarding the 11 to 19 million who broke our laws, Congress should first consider how to make the immigration system work for the more than 4 million people waiting patiently outside our borders to come to our country legally. A rational system would make it easier to follow the law than to break it.

Instead of passing another incomprehensible comprehensive immigration bill, Congress should debate and develop understandable reforms in a transparent systematic process that addresses all of the immigration issues. This will build trust with the American people and unite the country rather than divide it.