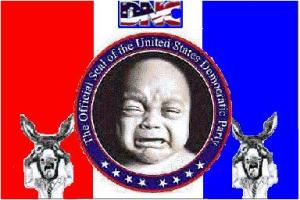 John Hinderaker at Powerline clearly explains why, contrary to the Democrats’ childish “he did it; it’s the Tea Party’s fault”, S&P’s recent action is really a Democratic Downgrade.

We happen to agree with these words of wisdom as opined by John Hinderaker’s position. We quite openly would like to add that not only is this a Democratic downgrade but also a means of telling the party leadership “…maybe we are indeed on the wrong side of some issues…”

“What did the Democrats do with respect to federal debt during the four years they controlled both Houses of Congress?” Hinderaker asks. Why they just merrily rolled along, increasing the debt without any plan, short term or long term, to repay it.

Of the $14.5 trillion national debt, nearly $4.8 trillion-one-third of the total-was incurred during that four-year period when the Congress was exclusively controlled by the Democrats. Moreover, and equally important, during that time the Democrats did nothing to assure the markets that they have a long-term plan to deal with the country’s burgeoning debt. On the contrary, for more than two years the Congressional Democrats have refused to adopt or even to propose a budget! If you are looking for the reason why rating agencies have lost faith in the ability of our government to get its spending and debt under control, you need look no farther.

Never have we collectively seen a congress that has been so lopsided, yet, so inefficient. The pomp and pompous attitudes of Nancy Pelosi, her cohort in the senate, Barbara “Please call me Senator…” Boxer, along with Harry Reid and Steny Hoyer. Please don’t come after any of the new members of congress from the Tea Party. Why you ask? Considering they’ve only been there approximately 8 or so months. To blame them for economic downturn is simply preposterous – to the point of ignorance.

The Democrats didn’t even propose a budget! But why should they? Tax increases, or revenue enhancements, especially on the rich, will cover everything. That’s what happens when ivory tower academics take over, as they have in the Obama administration, instead of business people who fly on their company’s private jet because the company’s accounting department figured out that was cheaper in the long run.

Actually, many of those newly elected last November are small business people–not billionaires and/or private jet owners–but they all know the need for a budget and the difference between profit and loss.

The Tea Party gets it. The Democratic Party doesn’t; The Tea Party…
This piece showed up both in our igoogle account as well as our RSS reader. It’s a

splendid article even considering what we did with it. Ethel C. Fenig writing for the American Thinker was the originator. And of course she deserves a fine hat-tip.